Last Friday, I co-led a presentation on single-board computers at the 2013 CUNY IT Conference. Since it was a very well-attended session (where we had great discussions with the attendees), I thought I’d provide a brief recap and link to the presentation material.

Life with Pi: Microcomputing in Academia

Before we began with the “formal” presentation, I showed a brief video:

Once the audience was thoroughly confused, I explained that the BeetBox is a quite literal “beatbox” that uses beets as percussion instruments. To achieve this, there are touch sensors in the beets that are wired to a Raspberry Pi. To emit the drum sounds, there is an amplifier and a speaker also hooked up to the RPi. There is a Python program that’s running on the RPi and translating the touches into drum samples. The RPi powers this apparatus behind-the-scenes.

But what is a Raspberry Pi? It is a type of microcomputer. So what’s a microcomputer? It’s a single-board computer that’s small, cheap, and open source. It’s about the size of a credit card and varies in price from $25 up to $100. As such, it’s quite an affordable little machine, containing all the parts of a functional computer: microprocessor, RAM, I/O, power supply, and so on.

The most popular microcomputer—at the moment, anyway—is the Raspberry Pi. It’s $25 for the base model and $35 for the “souped up” version (with more RAM and ports). Another one that comes up frequently is the BeagleBone (brought to you by Texas Instruments, the calculator guys) and it’s quite a bit more expensive at $89. And, the one that’s been around the longest, is the Aduino. They have several boards but the Uno board costs $30.

So now that we understand what they are… what are they for? Well, they can be used for hobbies, such as building a retro arcade gaming station or home brewing. Or they can be used to solve specific problems, such as the RFID pet feeder which was created by someone who needed to feed one of his cats a medicated food and, therefore, could not have his two cats eating each other’s food. (What the creator did was program an Arduino to move the lid on the appropriate food dish based on the cat that approaches the feeding station. This is done via RFID chips that have been attached to the cats’ collars. That way, when Sick Cat approaches the feeding area, her food is made available to her. When she walks away, the lid slides back over so no one cat eat. Then, when Healthy Cat gets hungry, the lid covering her food opens so she can eat. And so on.) Another use is for data collection, such as the Botanicalls kit which allows a user to measure a plant’s comfort levels (moisture in the soil, amount of sunlight, etc.) and tweet “status updates” so you can tell when your plant is thirsty or too hot. (It will also respond to changes in its status, so if it’s thirsty and you watered it, it’ll submit a tweet of thanks.)

So you can begin to see how microcomputers can be used for more than basic tinkering. But you may also be thinking: “That’s great but I’m not a programmer!” And that’s OK! You don’t have to be. Because these microcomputers are open source, there are large and dedicated communities surrounding each. There are plenty of tutorials and guides online—as well as complete projects!—that you can use to get started. You can also seek help from many places, including:

But why should you bother to do any of this? Well, there are actually uses beyond recreation. In fact, there is evidence of more and more applications in academia. My colleague Junior discussed uses in the classroom while Robin explained how microcomputers can be used in and for research. Steve discussed the benefits of teaching microcomputing techniques and explain why computational literacy is becoming more important in today’s world. The presentation was then rounded out with demonstrations of projects that each of us had constructed, followed by questions from the audience.

Junior discussed uses of microcomputers in the classroom, including:

You can also see Junior’s write-up of our presentation for more information about his section: http://juniortidal.com/2013/12/life-of-pi/.

Robin opened with several real-life examples of microcomputers currently being used for research purposes. She then outlined other venues for using single-board computers in and for research:

For a complete overview of Robin’s contribution to the presentation, see the write-up on her website: http://www.robincamille.com/presentations/microcomputing/.

The slides are available online: http://www.robincamille.com/jj/cunyit/.

We also created a handout that was made available at the presentation. You can download it from http://www.robincamille.com/jj/cunyit/handout.pdf.

The four co-presenters worked on this presentation collaboratively using git and a shared repository on GitHub: https://github.com/szweibel/CUNY-IT-Presentation. It was the first time any of us has used GitHub in this manner and it proved quite successful.

We used the reveal.js presentation framework for our slides. It’s very easy to use and provides beautiful (and responsive!) slidedecks. 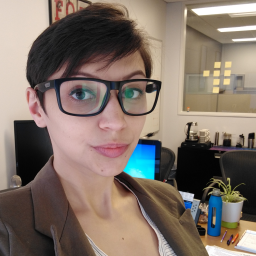 Alevtina Verbovetskaya is the Web & Mobile Systems Librarian in the Office of Library Services at the City University of New York.